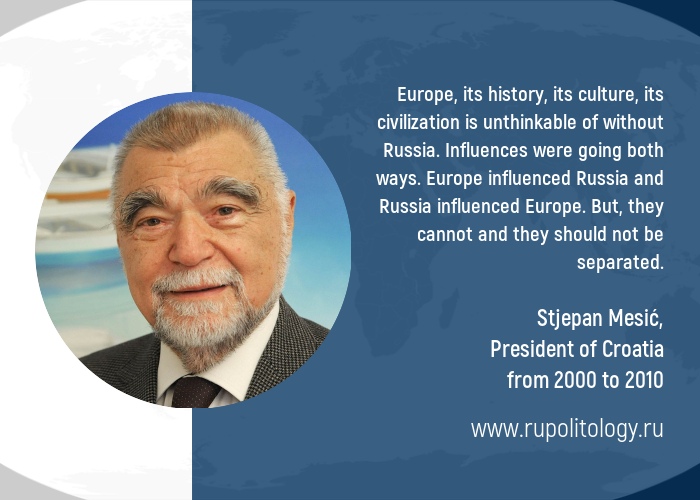 Interview with the President of Croatia

As part of the project of our journal “Russian political science – a space for dialogue” we publish an interview with the President of Croatia in 2000-2010 Stipe Mesic, who answered questions from the editorial Board.

1. You were a supporter of Croatia’s integration into the political and economic institutions of the European Union, but you said that Russia is one of the centers of power with which it is necessary to cooperate. What would You advise today’s leaders of Russia, the USA and the EU to restore full-scale cooperation? Maybe there is a need for any new integration socio-political institutions that would help to resume a full-scale dialogue?

I would not go so far, as to suggest some new integration instead of what we have today. No, we should correct and adapt the current system and institutions in order to bring them back, to bring them closer to what the spiritual fathers of the idea of a united Europe, had in mind. Of course, it it is not too late already, if it is still possible. I sincerely hope – it is possible. Besides, it is an undisputable fact that one cannot say “Europe” without saying “Russia”. And I don’t mean only Russia as a big power. No, what I want to say is this: Europe, its history, its culture, its civilization is unthinkable of without Russia. Influences were going both ways. Europe influenced Russia and Russia influenced Europe. But, they cannot and they should not be separated. If we take this as a starting position, then it is clear that the future of the relations between the EU and Russia is not in confrontation, but rather in cooperation, which is possible only on the basis of mutual trust and understanding. This is something both sides need to work on with the assistance of the US. I know that in today’s circumstances this might seem as a utopia, but this is the only way, if we want to avoid a full-scale confrontation. And I don’t think anybody wants this.

2. On the eve of the key event of the late XX century in Europe – the unification of West and East Germany, a variety of high-ranking Western politicians and diplomats promised the Soviet leadership that NATO expansion to the East will stop at the border of Germany and the GDR. But, as we can see, this has not happened – NATO is expanding. And this, of course, worries Russia. What do you think, for what purposes is NATO expanding? Moreover, this process does not make Europe safer, but rather creates new hotbeds of tension.

I know about the promise given to Moscow on the eve of the German unification and I spoke about this not only once. The expansion of NATO, generally speaking, can serve only those who base their policy on constant antagonism with “the enemy”, whoever this might be. In some specific cases, such as Croatia, the membership in NATO was really necessary and I supported it. But, this necessity was the result of the fluent situation in the Balkans following the wars in which Yugoslavia disintegrated. On the other hand, bringing NATO closer and closer to the borders of the Russian Federation results only in creating the cold war atmosphere in Europe and making the Old continent less and not more safe and stabile. NATO should definitively not be a tool in confronting Russia, but rather a political-military alliance focused on the safety of its members and on keeping and preserving peace in Europe, making it a continent without war, in other words NATO should be an element of stability and security.

3. And to the previous question. Maybe it will be too naive, but do you think it is necessary to think about a more global security system, which would involve the EU and Russia, and the United States with China?

A global security system is a must, no doubt about this. But, it should be born in the UN, as the only organization entitled to first discus, then adopt and finally implement such a system. It goes without saying that a new global security system is possible only if the US, Russia, China the EU and, of course, all the members of the international community take part in its creation. Those countries who can mostly contribute to the efficiency of such a system, because they are most capable of endangering it, should bear special responsibility for its functioning.

4. Let me ask you a question about the Ukrainian crisis. Ukraine was artificially put before the election to be either with Russia or with Europe. Obviously, Ukraine has close historical, economic, political and cultural ties with Russia, but it is also part of Europe. And Russia is a part of Europe. What do you think is the future of Ukraine, and what relations will be between Russia and Ukraine in the near future?

Every policy based on “either – or” is a bad policy. Ukraine should have never been put into position to decide between close ties with Russia and opening towards the EU. Ukraine should have both – then and now. It would benefit Ukraine as a whole, it would benefit Russia, but at the same time it would benefit the EU. In short: Ukraine should be a bridge connecting the EU and Russia and not a forerunner in the confrontation of the EU and the US, with Russia. As for the near future, the Minsk agreement is the first step on the long road to normalization. Abiding by the provisions of the Minsk agreement is something both sides, Russia and Ukraine, should do. Without reservations and without hesitation.

5. The policy of so-called sanctions is causing economic damage to both Russia and the EU. For example, according to some estimates, Croatian agricultural producers annually lose 40 million euros due to Russian counter-sanctions. Also, due to the sanctions policy, the South stream gas project, to which Croatia wanted to join, was not implemented. Who benefits from such a policy in relation to economic relations between the EU and Russia? And how to resume, and in the future to increase trade between Russia and Croatia, Russia and the EU?

Sanctions, international sanctions can only be put into effect by the UN. In case of the current confrontation this is not the case. Furthermore, sanctions always target the governments, but hurt the citizens. They very rarely produce the wanted results. If I recall correctly, only in the case of South Rhodesia, international sanctions did work. Otherwise they hurt whole economies, they hurt ordinary citizens, but the targeted governments stay. And their politics stay too. Southern stream is a matter of the past, so there is no need to elaborate on this. Resuming and increasing trade between Russia and Croatia and Russia and the EU will be possible only on a new platform, based on the political will of all sides to build a new structure of mutual trust and understanding, having in mind the Helsinki Act and the Charter of the UN.

6. Yes, South stream has not been implemented, but the Turkish stream gas project is being implemented quite successfully. Two lines with a capacity of 15.75 billion cubic meters each are planned. The first is designed to supply gas to Turkish consumers, the second – to the countries of southern and South-Eastern Europe. As a result, the” Turkish stream ” can pass through Bulgaria, Serbia, Hungary and Slovakia. What do you think are the prospects of this gas project? And are there any prospects of Croatia joining this project?

I can only say that Croatia should, in the field of energy supply, not be dependent on only one source. Having said this, of course that I would like to see the so called “Turkish stream” be a success and I really do not see why Croatia should not be a part of this project.

7. Now quite actively developing information technology, including in politics. Many politicians actively use social networks. The world becomes global, any event about which was written on the Internet becomes a point of attention for the whole world community. How much do you think information technologies are changing the modern world policy?

In serious politics I do not think that everything should be “tweeted” at once, in other words I am not a supporter of the “social networks politics”. Taking care of whole countries is a very, very responsible task. Every word by a politician should be seriously considered before it is spoken. Informing everybody, urbi et orbi, at once, about everything happening on the political scene is irresponsible and can only be a tool of building his or her personal image. This is not the way responsible people act – in my view, at least.

8. Before asking another question, let me congratulate you. In 2018, the capital of Croatia was recognized as one of the most visited cities in the world. Therefore, it is no accident that the tourist flow from Russia to Croatia is growing. In 2017, it was visited by more than 133 thousand Russian tourists (+11% by 2016). There is also an increase in tourists from Croatia to Russia – for the first half of 2018 in Russia came about the same as for the entire last year (16.2 thousand against 17 thousand). These are good figures-this is the basis for the development of economic, political and humanitarian ties. In Your opinion, what else can be done to ensure that the citizens of the two countries visit each other more often, study and develop joint scientific and cultural projects?

Thank you. I welcome the growing cooperation between Croatia and Russia, as well as between Croatia and countries around the world. Yes, we are a member of the EU, but this should not be a factor of limitation in our international relations. I always supported people of different countries visiting each other’s country. This can only contribute to better mutual understanding. I am glad more and more Russians are visiting Croatia and more and more Croatian citizens go to Russia as tourists. Thus it becomes more and more difficult to operate with stereotypes and prejudices. When we, I am now speaking about the whole world, start to see each other just as human beings, although of different nations, races, religions and political views and not as “others” with whom we have nothing in common, we will be able to enrich, develop and strengthen cooperation not only between different countries, but between their citizens as well. This should be our goal.

9. One last question. Do you think politics is an art or a science?

Politics is a very serious and responsible business.