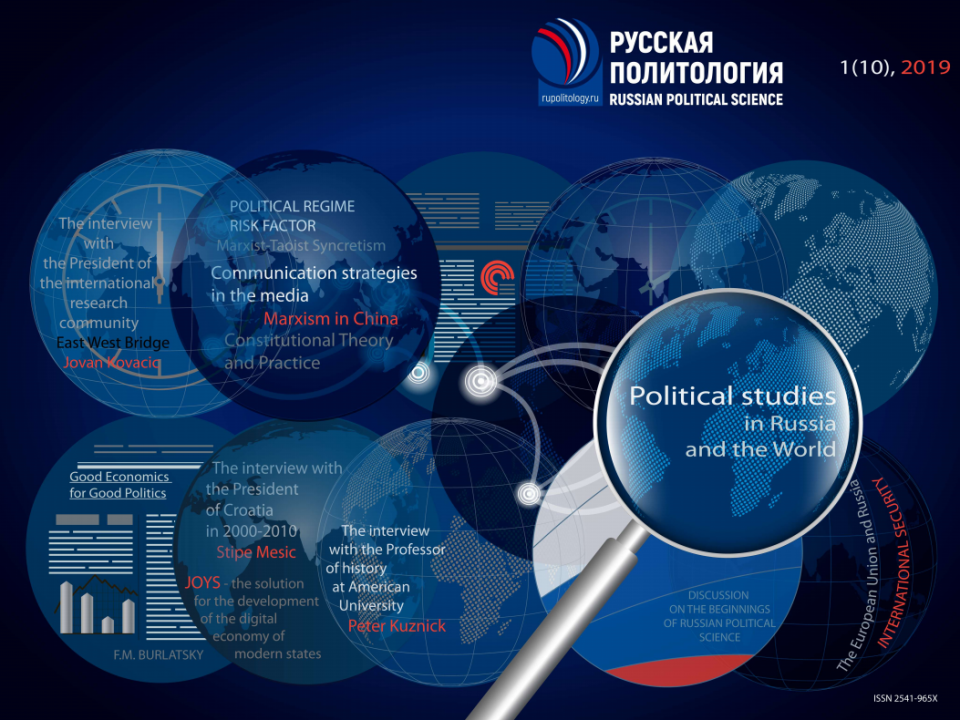 №10. Political studies in Russia and the world

We present the next issue of the journal «Русская политология — Russian Political Science». This is the 10th issue, which has been published by our editorial office since 2016. This issue was  ublished in English so that more political scientists from different countries could get acquainted with the works of the authors of our journal.

The second section presents inte rviews within the framework of the project “Russian Political Science — Space for Dialogue”. The project is aimed at developing a dialogue between epresentatives of different political traditions, to establish long-term communication among political scientists, political and public fi gures, scientists, business representatives of different countries and continents. This issue features an interview with the President of Croatia (2000 — 2010) Stipe Mesic, President of the organization East West Bridge Jovan Kovačić and an interview with a professor of history at American University in Washington, Director of the Nuclear Studies Institute Peter Kuznick.

The third section presents articles by political scientists from Russia, Canada and the island of Guam (USA). The presented studies analyze the policy of relations between Russia, China and the United States in Eurasia and the Middle East. Also in this section there is an article that deserves the attention of researchers of the theory of social contract and constitutionalism. The theme of the article: “The People’s Republic of China and The United States of America Constitutional Theory and Practice: Developing an Organic Сontract”.

The fifth section presents articles that analyze the economic situation in modern India, as well as technology Joys, which is aimed at the development of the digital economy in modern countries. In the sixth section of the article, which dealt with questions of ideology: Panideology and Marxism in China. In this section is also published an article that analyzes the phenomenon of interdependence of the political regime and civil peace in society.

This is the anniversary issue of the journal, which is the basis for summing up some results. Since the end of 2016 the editorial board:

From the very first issue the main partner of the journal is the Autonomous Non-Profi t Organization “Laboratory of Humanitarian Projects”. The journal is published at private expense.